Proton Pigeon's Opt Not Pluto Pop features inventive dance music for contemplative listeners. The record, three years in the making, is filled to the brim with electronic beats, moody atmospherics and futuristic imagery. Inspired by a series of sleep-deprived nights during a particularly cold winter in Chicago, PP dreamed up a frantic city soundscape recalling the bleakness of the classic anime worlds which plagued his visions. Although he originally conceived the project as an ambient journey through time called Future Highway, PP incorporated the unique notion of a car tuned into an interplanetary radio station. Opt Not Pluto Pop truly provides a glimpse of top 40 from another world with songs like "Lip Bomb" and "SE Exercise," featuring evocative vocal arrangements that meld harmoniously with the futuristic intensity of this mostly instrumental record. Churning rhythms and flirtations with ambiance enrich the sonic pallet, yet PP’s keen sense of melody makes even the most desolate tracks instantly memorable. So take a trip down the future highway with Opt Not Pluto Pop! 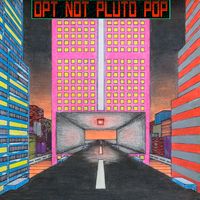