In the summer of 2008, Nessie & Her Beard and Team Red joined forces to create the songs "Semisweet" and "Sweet Popsicle." Semi-Sweet-Popsicle was a breakthrough double single, marking the first-ever collaboration between OCR artists. This endeavor was a collaboration in the truest sense of the word. Team Red, a hip-hop group that consisted of MC Sweet and DJ Popsicle (also known as MC Y.T. ), was stuck in a creative rut with “Sweet Popsicle” before interactions with Nessie inspired a new direction for the song. Sampling the unique vocalizations of the songstress, the two rappers locked into a hypnotic groove, spitting irreverent rhymes over the funky beat and asking the question of the summer: "What flavor of popsicle is this?" With "Sweet Popsicle" marking the last official release of the ultimate hip-hop duo prior to their indefinite hiatus, Team Red truly went out on top. Meanwhile, Nessie & Her Beard matched the rappers punch for punch with the pulsating, eerie "Semisweet," Nessie’s foray into popular dance music was aided by the steady hand of DJ Popsicle, who was a co-producer on the song. All in all, the minimalistic electronic grooves of Semi-Sweet-Popsicle are guaranteed to rock any party. 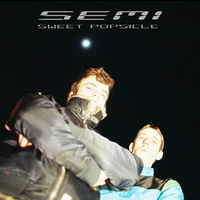