"Totally Ghost Out" is a funky Halloween single recorded by Seabird Station. The group, consisting of Tomi Mendel and Scott Meisburger, is all about fun! The tune was recorded using varied instrumentation, including a rockin' banjo and a Korean beer box. Tomi and Scott incorporated ideas discovered during fun-induced trances, including comical spoken interludes and disco-style falsetto vocals. The tune's upbeat, jerky arrangement conceals the chillingly hilarious tale of a ghost hunter beneath its electronic beats and hillbilly guitar parts. Weaving together vocals and music in a remix-style breakdown, "Totally Ghost Out" presents a kind of sound we’ve never heard before from OCR. So get in the spooky spirit with this holiday hit from one of OCR’s most exciting artists. 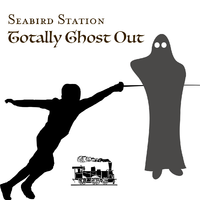